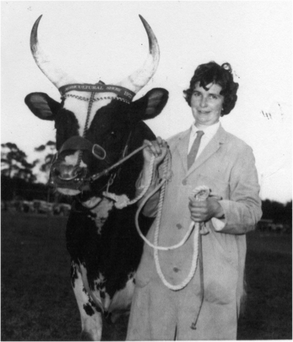 Ursuline Boran makes amazing cakes.  For the 150th Kilmore Show the Kilmore Agricultural and Pastoral Society have asked her to make the cake to celebrate the occasion.  Ursuline is a valuable member of the Kilmore Show Society regularly contributing her ideas and making suggestions as well as sharing her sweet treats at the meetings.
Ursuline has won the Wheel Changing Competiton when the competition was open only to female competitors, was run by the Young Farmers group and involved two cars and two teams.   Ursuline remembers that,  “They were very exciting and real crowd-pleaser events... the supporters cheering and telling you where the opposing team was up to, maybe they had dropped a nut, or moved their jack too soon, and urging you to “Quick! Quick! Go! Go!” It was exhausting, but such fun and exciting!  From memory I think my team-time was around the two minute mark.”

This year, the Wheel Changing Competition will be held again at the 150th Kilmore Show with some modifications and Ursuline has kindly donated the prize money for the winning competitors.


Ursuline Boran and her sister Mary Fogarty have always lived in Kilmore. Mary has kindly donated the prize money for the Best decorated Cake to commemorate the 150th Kilmore Show.


The sisters grew up as dairy farmers on Ms Boran’s property along the Northern Highway with their parents, Thomas and Mary Boran.
“I have wonderful memories of growing up here, so many memories of my father’s land,” Ms Boran said.  “Our family has been here for at least 145 years.”   The girls began attending boarding school at the Convent of Mercy, St Joseph’s College, in 1947 on the weekdays, which is now The Kilmore International School.
The family has always had a strong history of community involvement.
Father Thomas Boran served as a councillor for 34 consecutive years and Ms Boran is well known for her work with Ayrshire cattle, judging and exhibiting in various agricultural shows.


** Sections in Italics are selected from Nicole Precel’s article published in the Star Newspaper on 13th January, 2009 ** 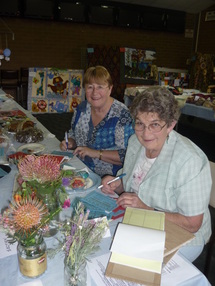 Ursuline Boran (front) working in the Homecrafts section at the 2010 Kilmore Show.